Safe revivals are limited in this challenge. A Knight and a full group of 4 is recommended to clear the dungeon. 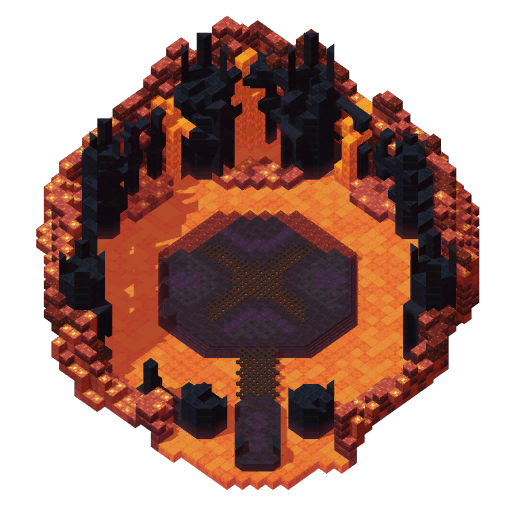 The ideal composition for this dungeon is 1 Priest, 1 Knight, and 2 DPS classes. However, it is possible to complete this dungeon without a Priest or a Knight, although it will require the players to consume many potions.

In this phase, Balrog only has two attacks. As long as you get used to these attacks, you should be able to go through the phase 1 pretty smoothly. However, if you’re doing Balrog for the first time, you will most definitely die a lot, especially to his triple swing attack, especially if your defense is too low, as you may die to just two swings.

This is one of Balrog’s most deadly attacks, and he will use this throughout the entire fight, so you better get used to it if you want to clear this dungeon. The attack starts with him facing towards someone, then quickly bringing up his weapon before doing his first swing to his left. You barely have any time to notice the animation before he does his first swing, so you should expect to get hit by his first swing if you are facing him. After his first swing, he does a swing to his right. Finally, he will bring his weapon above him and smash the area right in front of him. No matter what, you should try dodge this third swing/smash at all costs, as it will most likely result in a death, or most of your health. The hitbox is also a bit bigger than you think, so play safe and dodge away or into him depending on your position.

You can dodge this final swing if you are close enough to him. If you have enough defense, you can actually tank the first two swings and hug him in melee range, and rely on your healer or your potions to keep you healthy enough for the last attack, since you won’t have to worry about the third swing/smash since you are in melee range and won’t get hit by it. If you don’t have enough defense though and think you will die from the second swing, you must dodge the second swing as soon as he does his first swing. Probably the safest way is to dodge through him. Dodging to the sides may sometimes lead you to instantly getting hit by the second swing, and dodging away from him will leave you vulnerable to the final swing/smash.

Also, the third swing/smash will leave an AOE on the ground that will leave you with a damage over time debuff if you touch it, so try not to run into it.

Balrog will bring up both his arms and rear back before roaring in a direction with a hitbox in the shape of a cone. This shout will slightly damage you and knock you away from him while also leaving you with a debuff that slows you by 40% and reduces your attack by 50%. This is then followed up with him glowing red and hunching over before he charges forward quickly in that direction, dealing damage and knocking you back. The breath's knockback damage can be ignored, but you have to be careful that you won’t be knocked into the AOE that is left on the ground from his smashes or into the lava. Luckily, the dash can be easily dodged by dashing to the side. Even though the shout doesn’t do a lot of damage, you want to dodge it because the debuff that reduces your attack by 50% is really significant.

At 85% health, Balrog will jump to the center and roar outwards, making rocks fall from the ceiling randomly. There will be indicators for the rocks before they fall, so try to dodge them as they do hurt a lot. After the rocks have fallen, he will raise his weapon for around 5 seconds before doing a huge swing that will hit anyone on the platform and kill anyone hit by the swing. To dodge this swing, you must either stack on top of a Knight and hide under their Bulwark or Defender of the Faith, or jump on top of the pillars that spawn. You must be on the very top platform on the pillars to avoid the attack, and ranged characters can DPS from the top platform while they’re waiting for the swing to pass. You can also stay on the middle platform if it is too difficult to reach the very top platform, and then jump as Balrog swings, avoiding the attack.

Balrog will occasionally stop and shout “Burn them alive” or “Aid me”, resulting in two dragons to spawn in the elevated platforms on the top left and top right, for a total of 4 dragons. After summoning them, Balrog will walk towards the center of the platform before focusing on the closest target and doing a knockback shout (the one before he does his dash attack). It is the job of someone (usually the Knight) to go in melee range of Balrog to get the aggro while doing damage, and pull Balrog away from the rest of the group who will work on the dragons, but anyone can do this same job. These dragons will start throwing fireballs that cannot be dodged and apply a stack. Each of these stacks reduce your defense, so it is vital that you kill them as soon as possible before they start doing too much damage. The players who have to kill the dragons will have to stand on top of the red elevated blocks will deal a decent amount of damage over time (but not as much as lava), and you will have to sit on them while you DPS down the the dragons.

While the DPS goes to kill the dragons, the Priest should be healing the DPS and assisting. Before going to help the DPS though, Priests can throw down their Sanctuary in the center for the tank/person who is taking aggro.

During the second phase, Balrog will sometimes dash two times consecutively instead of a single dash like the first phase. The second dash will target the closest person after the first dash has ended.

At around 65% health, Balrog will phase and start off with a new attack…

Balrog will jump to the center and glow red before doing an attack that pulses, hitting everyone on the map. The second pulse stuns. When he does this attack, everyone should immediately group to the center where there are two ways to survive this attack. First, is that everyone’s health must be topped off at 100% by the Priest and spamming their heal until you get stunned, and you tank through the pulses. Tanking all the pulses from 100% will leave everyone at around 20% health if the Priest manages to heal the first pulse (since only the second pulse stuns). The Priest can also thrown down their Sanctuary before everyone gets stunned in the center, but it’s not necessary since there’s time to heal everyone once the stun goes away before the next attack. The other way is to have the Knight use their Bulwark or Defender of the Faith to block the pulses and DPS Balrog while the attack is going on. It is also possible to tank through all the pulses if you are using your potions, especially if your pet is enabled to auto-use consumables. Below are two examples of how to survive the attack. First is with the Knight using their blocks for the team, while the second is with a Priest healing through the attacks.

In phase 3, Balrog does three dashes instead of two after his roar. After the third dash, he will be stunned for a few seconds. Once again, he will target the closest person after the previous dash.

At around 45% health he will go into another dragon spawning phase and start off with the same attack at the start of phase 2 where he creates the pillars and swings. At this time, note the central pillar will not spawn.

At around 30% health he will transition into his final phase where he gains a new attack that combines his previous attacks.

Balrog will jump to the center and start glowing a violet pinkish color. He will throw down three rocks at each person that you need to dodge. After the third rock has fallen, he will deal AOE damage that will deal a lot of damage. If you survive the hit, the AOE will stun as well. There are two methods of surviving this attack. First is to dodge the first rock and then gather around the Knight immediately (if you have one) who will then use their Bulwark or Defender of the Faith which will block the 2nd and 3rd rock, as well as the AOE. The second method is to go into the lava to the South and start jumping as you go into the lava (you spam jump to reduce the damage you take from the lava) towards the platform at the start of the dungeon. Make sure that when you reach this small platform that you do not touch the teleport portal until the AOE has passed. After you get onto the platform, you simply wait until the AOE has passed before you take the portal to go back onto the platform.

At around 25-30% health, an NPC named Tristan will spawn to aid you. (note that in some rare cases, he will not spawn.) He has an ability that stuns Balrog, and you can look out for this by the animation where Tristan will raise his sword upwards and it will shine a few times. This is extremely helpful because it can interrupt Balrog when he does the combined attack and you won’t have to go to the lava or hug your Knight if you manage to keep an eye out for when Balrog will get stunned. One thing to note is that Tristan will have a 100% chance of stunning Balrog on the first AOE that he does after Tristan spawns.

Below are three videos, with the first showing the group stacking on top of the Knight to avoid the attack, the second showing how to go through the lava to escape the attack, and the third showing how Tristan stuns Balrog.