There are a variety of Quests in MapleStory 2.

World quests are identified by a blue exclamation mark. World quests can be found in almost any map around the Maple world. These quests have a large variety of tasks that include: Killing a certain amount of a monsters, collecting a rare drop from a monster, traveling and talking with another NPCs, gathering specific consumables and materials, killing an elite monster, or looting a quest specific item from investigating. 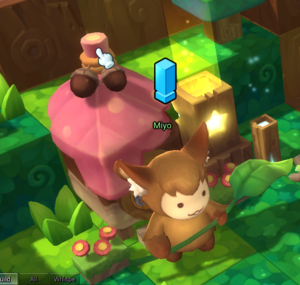 Miyo is a quest giver found in Sylvan Woods Trail.

World quests always give a reward for completion. You will always receive mesos and experience relevant to the level requirement of the quest. However, some quests give additional rewards such as: Trophies, Dyes, Consumables, Armor and Weapons.

The rewards from a quest will be equivalent to the level requirement of the quest. The higher level the zone/quest, the greater the reward.

The world map will not show all available world quests, but will show the blue exclamation mark in specific maps. Giving you an easy way to find world quests.

The mini map is best used while exploring Maple World. Any available world quests will show on your mini map regardless of your location within the map. The mini map can be expanded the maximum size temporarily by pressing the TAB key to make it easier to see these quest givers.

The quest log will be the best option for finding specific quests as it offers a search function with detailed information about the quest givers location, rewards for completion, and prerequisite quests. The quest log can be accessed through the in-game menus located at the bottom right of the screen or through the trophies menu.( For quests that are linked to trophies. Titles, dyes, or skill/attribute points can be awarded for completion.)

Daily quests are identified by a green exclamation mark. Daily quests can only be completed once per daily reset. (00:00 in-game time). So far in GMS there is only 2 daily quests givers: 1 for guild quests and 1 for world boss quests.

Daily quests rewards can vary depending on the quest giver. All daily quests will give mesos and experience. Depending which daily quests you are completing you can receive: Rue's, Guild Coins, Guild Exp, Guild Contribution, or Guild Funds.

It is important to note that the mesos rewarded from guild daily quests are deposited into your guild's bank instead of your personal wallet.

Aliyar: Located in Queenstown, Aliyar gives daily quests to eliminate world bosses. Aliyar gives 2 quests per day. The world bosses included in the quests are random each day. For completing these quests you are rewarded with Rue, Mesos, and Exp.

Chairwoman Shuenji: Located in your Guild House, Shuenji gives daily guild quests with a variety of tasks. The quests can include fishing, performing, killing, and more with your guild mates. For completing these quests you are rewarded with Exp, Mesos, and Contribution for your guild.

Not to be confused with Daily Quests, Daily Missions are simple tasks you can complete once per day to receive a variety of rewards. These quests can include: Capturing pets, attacking with certain items found around the world, using items in a players home, defeating a certain dungeon boss, or defeating enemies in certain maps. 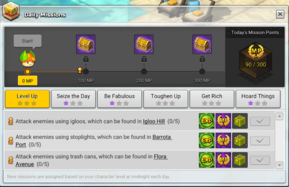 Daily missions give a variety of rewards depending on which category you complete missions in. They can range from cosmetic vouchers, rue's, pet capsule's, meso pouches, exp potions, gold mission complete boxes and much more. For a full list of rewards and missions visit the Daily Missions page.

All rewards from Daily Missions are given via a type of box. The box you get will vary depending which type of mission you complete, and within each box is a variety of items you may receive.

They can be located by hovering over the world map icon at the bottom left and moving up 2 spaces. There is no default key-bind, but one can be set up.

Event quests are identified by a purple exclamation mark. Event quests only last for a limited amount of time depending on what dates Nexon has decided for the event. Events are generally no shorter than 2 weeks. Types of quests included in event quests include: Event dungeons, World wide collection quests, event specific maps, monster hunting, and gathering event specific collectibles. (Halloween Stickers, Lollipops) For the most part Event quests can only be completed once per daily reset.

Event Guide Ruby is located in Queenstown and is an Event Quest giver.

Event quest rewards will vary depending on current events. The rewards can include: Consumables, Event specific outfits, Mounts, Pets, Housing decorations, and more! Event quests can only be completed once per daily cycle, but rewards may change based on the number of days you have done an Event quest.

Currently all the Event quest givers are located in Queenstown, located next to Tria. They are identified on the map with a bright purple exclamation mark. Some quest givers, such as the Halloween quest giver, are located within a special map.

Event Guide Ruby: Located in Queenstown at the upper-left hand corner, Ruby gives a daily event quest based on what current events are active.

They can be located by hovering over the world map icon at the bottom left and moving up 2 spaces. There is no default key-bind, but one can be set up. 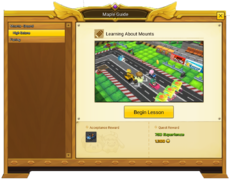 Each Guide Quest acts like a regular quest and gives a reward including mesos and experience, as well as often giving other rewards related to the Maple Guide tutorial that is performed. These items may include mounts, items, or vouchers.

Quest givers for guide quests will be found in their respective maps once you are transported to the private map where the guide quest is. These can be accessed through the Maple Guide interface.