Enchantment is a game mechanic that allows players to improve the stats of their equipment.

The enchantment UI can be accessed by pressing the button labeled "Enchant Items" at the bottom left corner of the Inventory window. Alternatively, Ophelia can be found at Nerman Forge and Peachy at Minar. 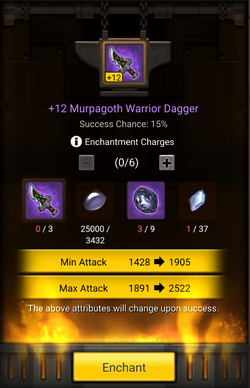 There are two blacksmith NPCs to choose from when enchanting: Ophelia and Peachy. Ophelia enchants gear with risk of failing based on the enchantment level, while Peachy always succeeds in enchanting gear but requires much larger amounts of materials. Peachy also requires an additional type of material called Crystal Ores, which is mainly obtained through dungeon reward boxes. In most cases, Ophelia is the recommended method of enchanting, requiring less resources on average. (In Korean Maplestory 2, failing an enchantment with Ophelia destroyed the equipment, which meant that Peachy was a viable alternative.)

Ophelia enchants gear with risk of failing based on the enchantment level, but requires much less materials. The success chance decreases as enchantment level increases. Premium Club membership reduces the catalyst cost for Ophelia's enchantment by 10%.

Enchantments to +11 and above require copies of the equipment. Additional copies on top of the required can also be added to increase the success chance, but only up to 30%.

Each time an enchantment fails, the equipment receives a number of enchantment charges based on the enchantment level. On future enchantment attempts, the player may choose to spend any amount of available charges to increase the success chance by 1% for each charge, up to 100%. These charges will be used up whether the enchantment succeeds or not.

The table blow lists information about success rates at each enchantment level:

The tables below list the required materials for enchanting different types of gear:

Enchantments to +10 and above require Crystal Ores instead of Crystal Fragments.

Compared to the average cost of each of Ophelia's enchantments, Peachy's much higher cost becomes very apparent at around +10 and above. For example, a +10 -> +11 enchant of an epic two-handed weapon would cost:

The tables below list the required materials for enchanting different types of gear: