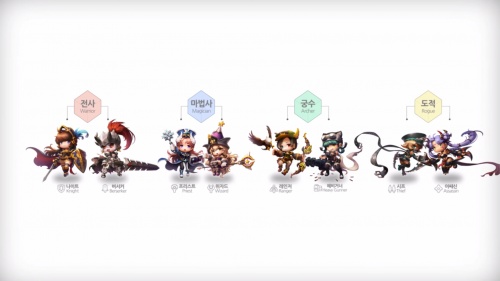 In Maplestory 2 players will be able to closely define their role by the class played. Unlike the original MapleStory, there are no subclasses which upgrade into more advanced classes. Class specialization and customization are instead determined by the Skills a player takes within that class.

For example, in the original MapleStory, a player would start as a Magician. Two possible options to class change to after were Fire/Poison Wizard and the Ice/Lightning Wizard. In MapleStory 2, a player can choose to be a Wizard and will always be a Wizard throughout the game. Instead, a player can choose to take Fire element skills to be a Fire-specialized Wizard, Ice element skills to be an Ice-specialized Wizard, etc. Since skills can be freely reset, it is possible for players to create several skill builds for one class to specialize in rather than be locked to a single specialization.